A Surprising Mediterranean Getaway In Gibraltar

Gibraltar is one of those places in the world you’ve probably heard of, but never really given much thought to. You may not even know where it is! If that’s true, don’t worry—a lot of people don’t really realize what or where this territory is. But once you know, you might just be inspired to try to travel there.

To give some background and basic information, Gibraltar is a small peninsula that juts out from Spain’s southern coast, on the Mediterranean side. It has a long and fascinating history, having been inhabited by Neanderthals, Romans, Carthaginians, Visigoths, Moors, and the Spanish over the years. Since the 18th century it has actually been a British territory, though its status is still a matter of debate among political figures today.

The peninsula is most famous for its “rock,” which is a giant cliff that dominates the landscape of the area. And the rock also has a pretty fascinating history. In antiquity it was known as one of the Pillars of Hercules, a nickname given to the promontories that lie on either side of the Strait of Gibraltar (which is the narrow gap between Africa and the southern tip of Spain). The ancient civilizations that passed through Gibraltar used the rock as a place to worship the mythical demigod. 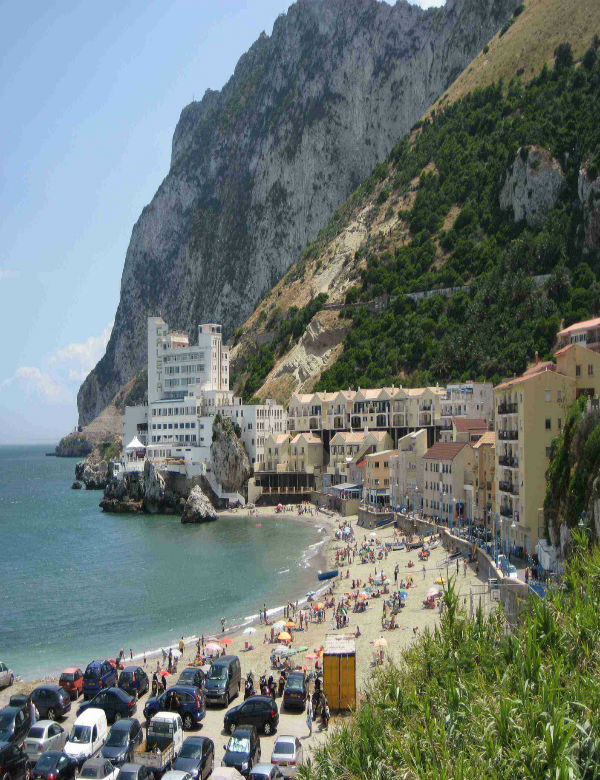 History aside, Gibraltar still makes for an interesting place to visit today. Here are a few of the highlights if you’re intrigued.

As you may surmise from its name, this is a protected reserve that covers much of the upper portion of the rock. It’s a beautiful area known for stunning views of the sea, as well as the countless species of birds that pass through during migration. The reserve is most famous for its population of Barbary macaques, friendly and fascinating apes that are native to the peninsula. They are the only native apes still living in Europe, and are among the biggest draws to Gibraltar.

The rock isn’t merely a geographical structure or an ancient hub for worship. It’s also a defensive fortress. Late in the 18th century, Spanish and French forces attempted to recapture the peninsula from the British, leading the defenders to forge tunnels through the rock for protective purposes. These days, you can still tour the siege tunnels, which makes for both a pleasant daytime activity and a surprisingly intimate brush with history.

Gibraltar isn’t all about the rock. It’s also home to some beautiful beaches that feel much like other Mediterranean gems. The best of them is at Catalan Bay on the far east side of the peninsula, away from the main urban area. It’s home to a small fishing village that makes it even more picturesque. It’s a wonderful place to spend an afternoon, and even have a swim in the Alboran Sea.

Europa Point represents the southernmost tip of Gibraltar, and as such it’s a fascinating geographical area. This is a portion of the peninsula made for long walks and sightseeing, and you can visit the Trinity Lighthouse that stands as the primary beacon at the point where the Mediterranean meet the Atlantic. Other landmarks in the area include a shrine to Our Lady of Europe (a holy Christian carving) and the Mosque of The Custodian of the Holy Mosques. Both are worth visiting in person.

Whenever you’re traveling in Europe, you probably like to find a few nice restaurants to try. There are plenty of good options in the small territory of Gibraltar, but Gatsby’s is the most interesting of the bunch. That’s largely because it combines several different European cuisine styles, which seems only appropriate for a region that’s had so many different cultural influences over time. Plus, it’s located in Watergardens, a charming seaside area where you’ll find some of the better shopping and eating options around.

These are just a few of the specific attractions, but all in all the territory makes for a surprisingly charming stop on a European vacation.

Hey, lovely peeps! These beautiful indigo coastal decor ideas inspired me to create another gorgeous seaside collection. If you want to...

END_OF_DOCUMENT_TOKEN_TO_BE_REPLACED

A restored old windmill, turned into a dreamy holiday escape in Greece

Sea, sun and sand... How beautiful is the life in the summertime : ) Speaking of summer, I can't wait to take you on a short trip to th...

END_OF_DOCUMENT_TOKEN_TO_BE_REPLACED

Sometimes you are doubtful about what to wear if you have to travel. Usually the decision comes down to grabbing fancy clothes to go ou...

END_OF_DOCUMENT_TOKEN_TO_BE_REPLACED

Hello, Monday! Let's kick off the new week with this gorgeous collection of Spring boho-chic outfits! I think each piece of these beaut...

END_OF_DOCUMENT_TOKEN_TO_BE_REPLACED

A splendid summer holiday home on the Greek island of Syros

This splendid summer holiday home on the Greek island of Syros will steal your heart! Every part of the house faces the beautiful Plagi...

END_OF_DOCUMENT_TOKEN_TO_BE_REPLACED

Hey, loves! My all time favorite season is in full swing and I'm brimming with happiness : ) How about you? Have you already enjoyed yo...

END_OF_DOCUMENT_TOKEN_TO_BE_REPLACED

Hello, lovelies! Sorry for haven't heard from me lately, but it's been a crazy month that brought so many changes in my life. I promise...

END_OF_DOCUMENT_TOKEN_TO_BE_REPLACED

Happy Tuesday, my lovely friends : ) I hope you enjoyed a wonderful Easter with your loved ones. I just came back from a beautifu...

END_OF_DOCUMENT_TOKEN_TO_BE_REPLACED

Happy Thursday, lovelies! Today is our last day with the kids on the beach. I will certainly miss it! I LOVE the sea so much and I desp...

END_OF_DOCUMENT_TOKEN_TO_BE_REPLACED

Happy Monday! I hope you all spent a lovely and relaxing weekend! How about starting the new week with a beautiful home tour in P...

END_OF_DOCUMENT_TOKEN_TO_BE_REPLACED

The cutest tiny home on wheels

Hello October! I'm so happy we have sunny and warm fall weather again. These days I realized that I couldn't live without sun. Yes, sta...